The Perfect Storm for Bitcoin (PART 3)

The Perfect Storm for Bitcoin (PART 3)

In our last edition of The Perfect Storm for Bitcoin, we adressed the fact that the Bank of England and the Bank of Japan have already resumed their bond purchases. We noticed that the growing burden of debt and the accompanying growing interest payments are forcing central banks around the globe to pivot in their hawkish stances. Just this week, we now saw the United Nations call on the Fed and other central banks to halt interest-rates increases.

The U.N. states that ”the Fed’s rate increases so far this year would reduce poor countries’ economic output by $360 billion over three years, and further policy tightening would do additional harm.” As our recent blog posts have shown the many cracks in our current financial system and the growing problems that we are facing at the moment, lets now focus on a new economic system: Bitcoin.

The price of Bitcoin has declined by nearly 72% from its all-time high of around $69.000 in November 2021 towards a price of $19.414 at the moment of writing, thereby flushing out nearly all speculators and pandemic investors leaving only the dedicated long-term holders in the market. The beauty of bitcoin, however, only reveals itself when you look beyond the simple measure of current price. It takes time for a currency to grow and become a full global money, as seen in the chart below. 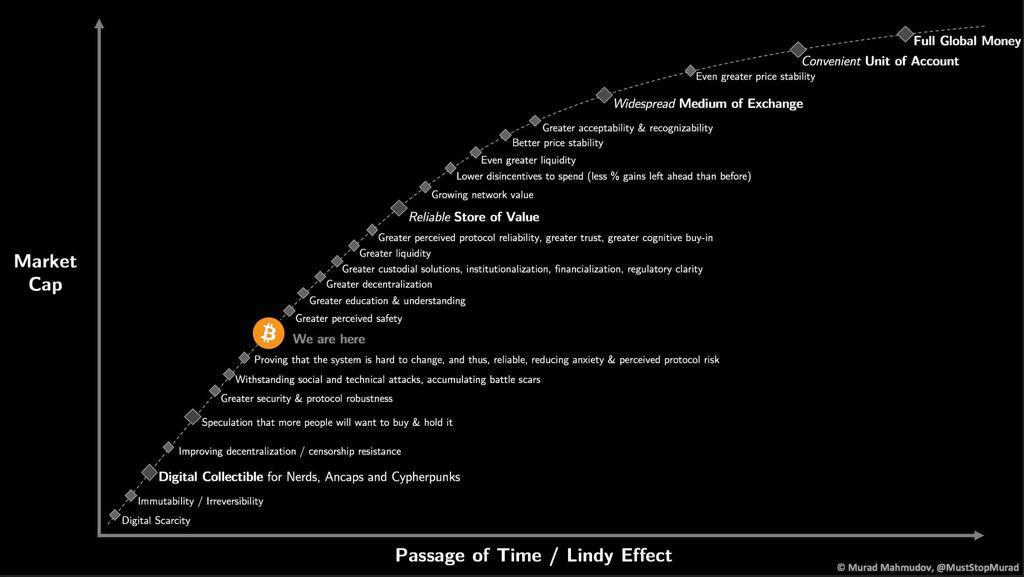 One of the best explanations I have seen so far is in an 10 years old Reddit post from the time of the collapse of MtGox: ”No, it is going to be a very painful up and down process. Because the technology has so much potential, it is going to experience explosive growth. Because it experiences explosive growth, it is going to have dramatic, painful, scary collapses. Then there will be fear. Then it will stabilize, and then it will start growing again. A few months later, it will explode again as it approaches the next big transition.”

As the volatility of bitcoin can be nerve wrecking for many, the focus should be on the intrinsic value of bitcoin instead of the (short-term) price. Benjamin Graham, the father of value investing, explained this concept by saying that in the short run, the market is like a voting machine–tallying up which firms are popular and unpopular. But in the long run, the market is like a weighing machine–assessing the substance of a company. Although Benjamin Graham mostly used his investment principles in the stock market, his principles remain solid and can be applied to other areas. Now, the beauty of an open decentralised blockchain is that everyone is able to analyze transactions, wallets and the blockchain for information.

Amid the current market (price) correction the dormant bitcoin supply hits 65.77%, meaning that 65.77% of the bitcoin supply has not moved in 12 months therefore indicating strong holder conviction and behaviour. This indicates that long-term holders hold onto their bitcoin even through a 72% price correction and leave their bitcoin in their wallets without touching or moving it. Anyone holding onto an asset with that kind of volatility must really believe in the asset.

It seems that the long-term holders of bitcoin believe in bitcoin some much that they are willing to sit through a 72% decline (and are even buying more). So in order for us to understand such behaviour, we first need to cut ourselves loose from the focus on current market price and instead focus on the value and fundamentals of bitcoin. (In our next edition of The Perfect Storm for Bitcoin, we will go into depth on the basics of bitcoin). Understanding Bitcoin is a long and diffucult proces, but according to the holder conviction it seems that once you truly understand bitcoin, there is no going back. So what if we now start to focus on the fundamentals of bitcoin, as Benjamin Graham would focus on his companies instead of their stocks? If we do, a different story emerges.

For example, we notice that the bitcoin supply on exchanges has hit the lowest level since November 2018, as a result of this trend less than 9% of BTC currently exists on exchanges for the first time since 2018. This trend indicates that more and more bitcoin are bought and put into non-custodial wallets (i.e. bitcoins are bought to store for the long-term instead of kept onto exchanges where they can be sold instantly for profits). So the dormant bitcoin supply that is already kept within wallets is at 65.77% and it seems that more and more bitcoin are being added to the supply outside exchanges, perhaps growing the number of dormant supply kept within personal non-custodial wallets. 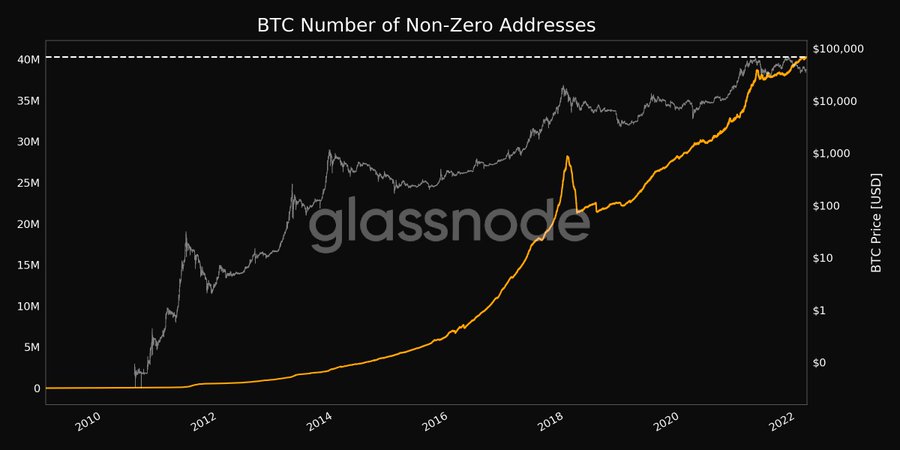 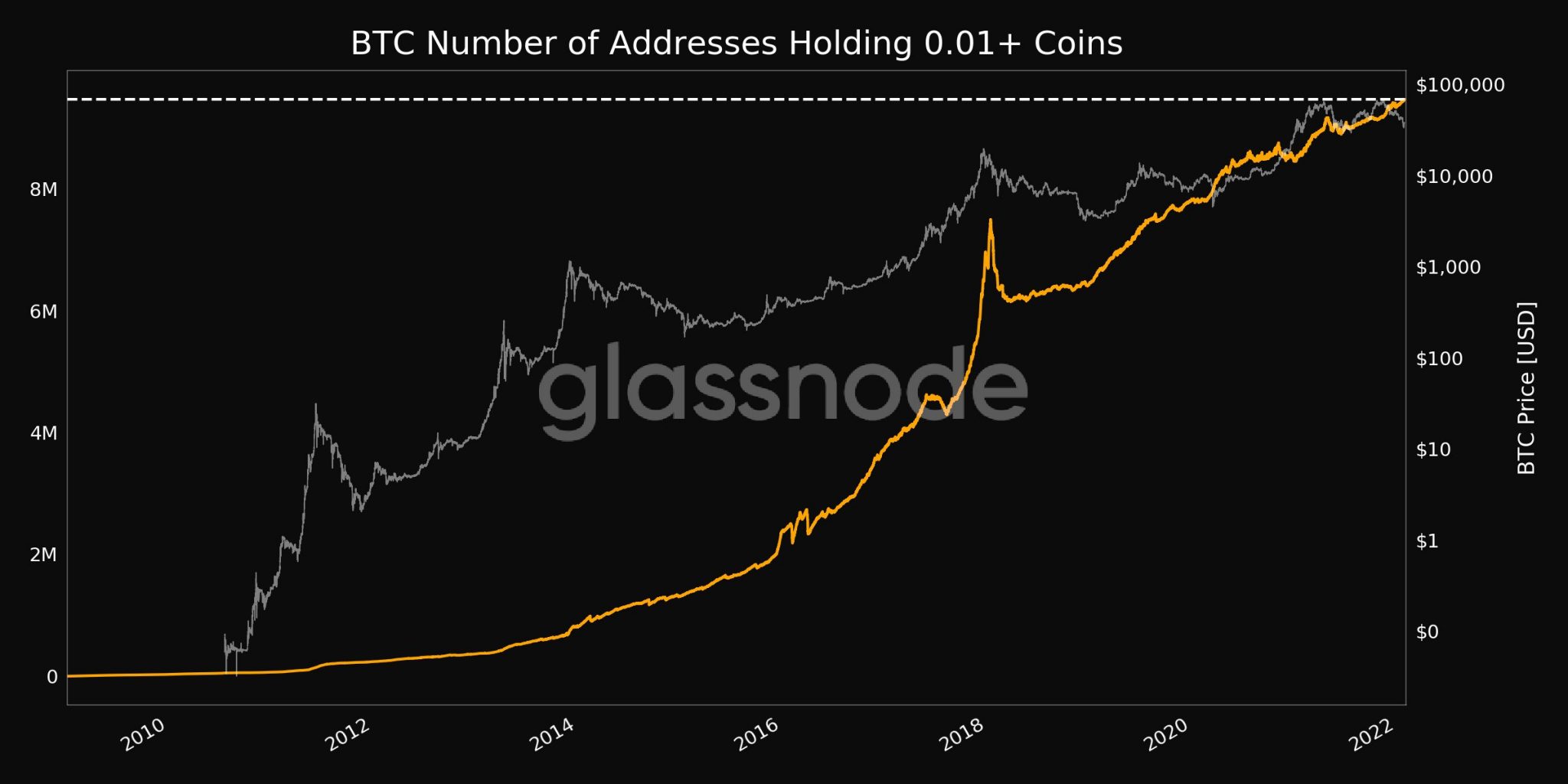 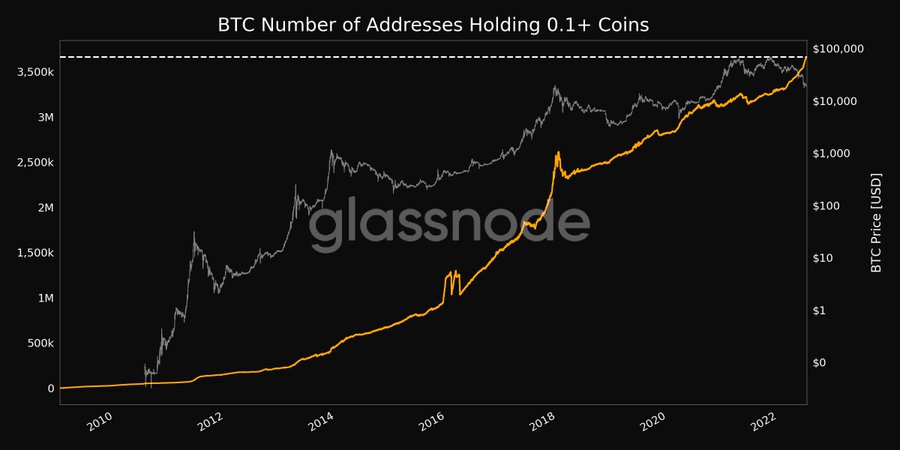 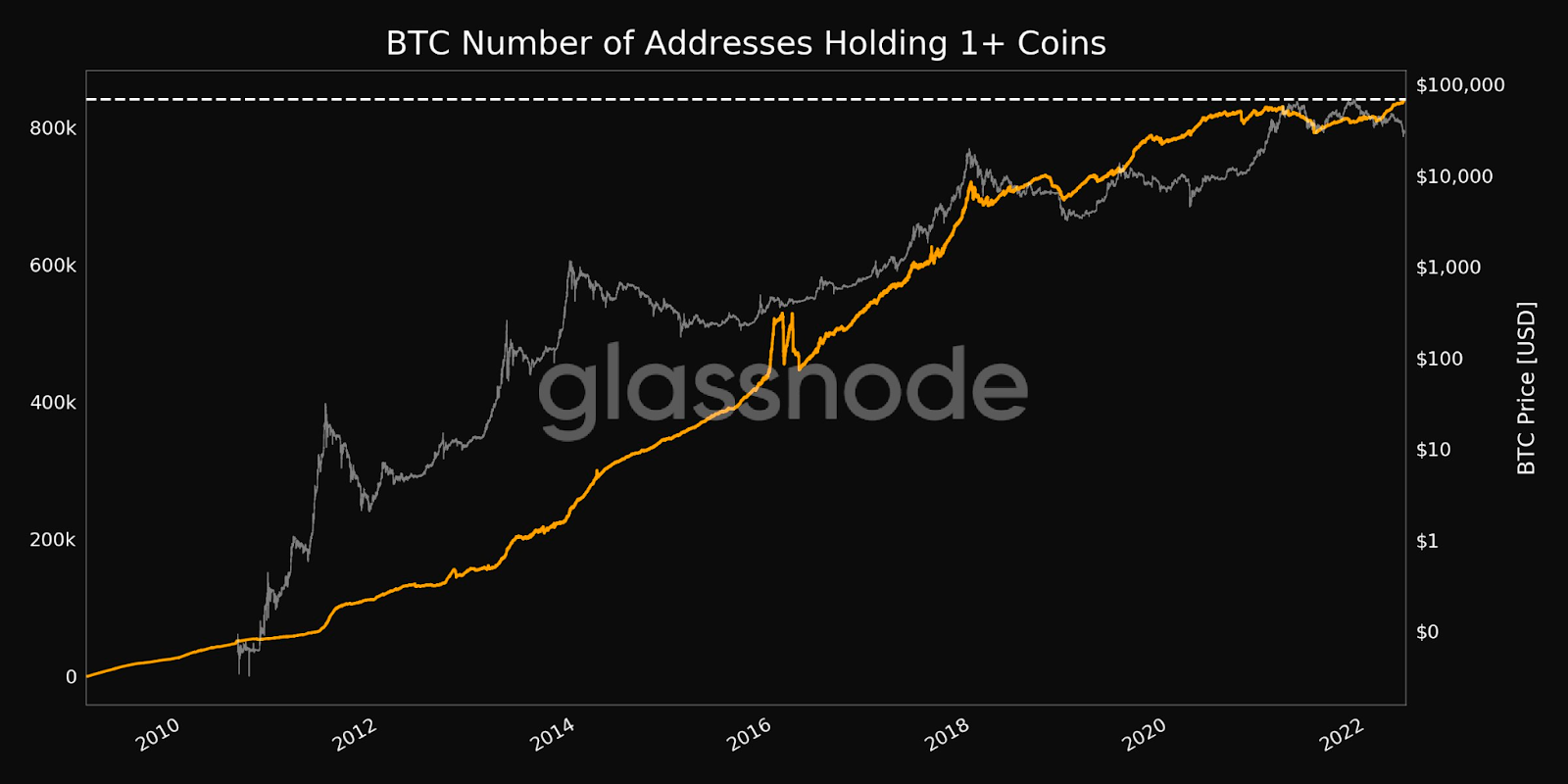 So it is clear that the spot buying (by retail) continues at an ever increasing rate and that holders are accumulating more bitcoin and putting these bitcoin into their own storage, thereby decreasing the circulating supply and potentially triggering a supply shock when combined with the halving in 2024. Bitcoin is leaving exchanges and gets deposited into non-custodial dormant wallets where they are not moved or sold.

In addition to spot buying and a clear long-term holder conviction, we see that the mining hashrate hits an all-time high. According to Cointelegraph: ”Although the Bitcoin price is down 58% year-to-date against the United States dollar, the mining hash rate is up 43%.” In simple terms, the more hashing — or computing power — that the network churns out, the greater the overall security of Bitcoin. As a result, Bitcoin is more resistant to attack, the most common of which is known as a 51% attack.

The difficult adjustment determines the rate at which blocks are solved. It fluctuates roughly every two weeks and is expected to increase on Oct. 10 based on the surging hash rate. The difficulty adjustment has been on a steady march upward in 2022 — meaning blocks are, on average, getting harder to solve — after falling for the first time in March 2022. The hashrate, as shown to the right, took a big hit in 2021 as China banned bitcoin mining (again) but has seen a steady increase since then. The amount of total computing power now amounts to the entire population of Earth guessing 30 billion hashes per second.

In the recent months, we examined more bullish developments on bitcoin:

We are experiencing a shift in narrative not seen before. The energy narrative around bitcoin mining is shifting, as energy companies are acknowledging that bitcoin mining can be good for the energy grid as miners can shut down easily and easily absorb the surplus capacity at other times. Even a recent report by the White house states that: ”mining operations that capture vented methane to produce electricity can yield positive results for the climate.” In addition, we are seeing a narrative shift by institutions and the demand for bitcoin, as clearly shown by the recent moves of Blackrock. Lastly, even the recent price action of Bitcoin is drawing attention from outside the cryptocurrency market as seen by the last two bullet point above.

The focus on the fundamentals and the growing adoption of bitcoin is what bitcoiners call ”zooming out”, or ”seeing the bigger picture” and it seems they have a good reason for it. When you focus on the adoption and the fundamental value of bitcoin, the volatility and the recent price actions do not matter anymore. It simply provides you with an unique opportunity to accumulate more bitcoin on the cheap.

In this edition of The Perfect Storm for Bitcoin, we shifted our focus on the fundamentals of bitcoin steering away from the recent development in the economy and the actions by central banks. In the next edition, we will focus on bitcoin as a form of money and why bitcoin is the future of money, as well as several use cases for bitcoin that are not possible with ”traditional fiat currency”.

– People around the globe now have an option to opt out of all this goverment induced trouble, as they are now able to use and store their wealth in unconfiscatable form of money that is not controlled by any goverment or central third party. People, now have the option to use Bitcoin, a peer-to-peer decentralised network. A type of digital currency in which a record of transactions is maintained and new units of currency are generated by the computational solution of mathematical problems, and which operates independently of a central bank. People now for the first time in human history, have the ability to store value in an asset that cannot be confiscated by goverments and is freely transported across the world, that does not care about your race, or sexual preference.