In our last article we discussed why we love companies that engage in share buyback programs. In this article, we we will discuss the following topics:

[1] What happens to bond prices when interest rates rise? 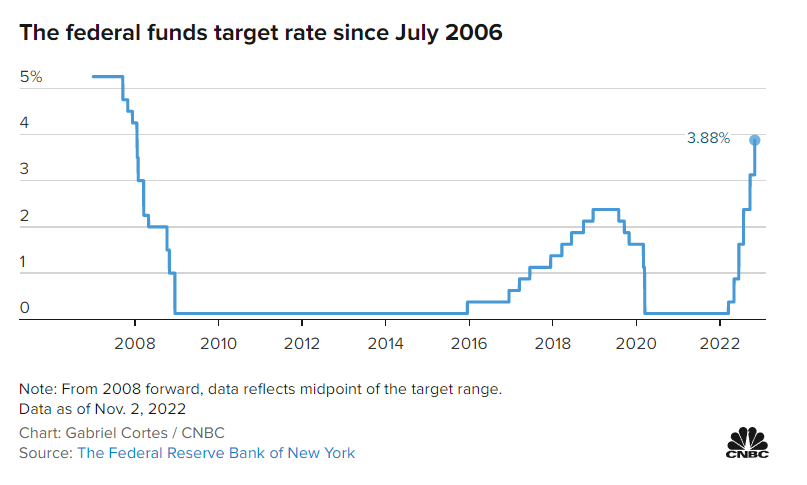 The reason: The price of a bond reflects the value of the income it delivers through its coupon (interest) payments. When interest rates rise, the price of existing bonds tends to fall. This is because when interest rates increase, new bonds are issued with higher yields, which makes them more attractive to investors. (i.e. the new bonds pay higher % interest and are therefore more favorable). As a result, the demand for existing bonds with lower yields decreases, causing their price to drop. This inverse relationship between bond prices and interest rates is known as the “interest rate risk” of bonds.

In many developed countries, there is a benchmark interest rate which is the rate at which the country’s central bank lends to other banks. The federal funds rate is the interest rate at which banks lend money to each other. It is the primary tool that the Federal Reserve uses to influence monetary policy and the overall supply of money in the economy.

The Federal Reserve raised the target range for the federal funds rate by 75bps to 3.75%-4% during its November 2022 meeting, marking a sixth consecutive rate hike and the fourth straight three-quarter point increase, pushing borrowing costs to a new high since 2008. Source:

According to the World Economic Forum: The 2022 rate hike cycle is the fastest, reaching a 2.36 percentage point increase nearly twice as fast as the rate hike cycle of ‘88-‘89, as shown in the Table to the right. Source:

[3] Why does this present an opportunity for companies with debt?

If companies have bonds trading in the marketplace and the prices of these bonds decline significantly due to rising interest rates, the company can use their cash flow to buy back these bonds on the market. Whether a company buying back its own debt is a good thing or not depends on a number of factors. In general, a company buying back its own debt can be a sign of financial strength, as it indicates that the company has enough cash on hand to repay its outstanding debt. This can improve the company’s creditworthiness and make it easier for it to access credit in the future. This means that if the companies bonds historically were priced at $100 but due to rising interest rates have declined towards $50, the company can buy back these bonds for only $50 therefore decreasing their interest expense in the future.

[4] What happens to our example Warner Bros. Discovery

In May 2022, we first wrote about Warner Bros. Discovery (WBD) at a share price of $18.76 (28-05-2022). Since then the company has reported two consecutive quarters of losses amounting to $5.7 billion compared to their $27 billion marketcap. In recent news, we also learned that the company is slashing jobs rigorously amid various restructuring charges and macroeconomic challenges. As of today (12-12-2022) the share price has dropped to $11.23. Warner Bros. Discovery is furthermore highly leveraged and has nearly $50 billion debt and $47 billion net debt according to their Q3 financials. If we look at the debt schedule as shown below we note the following: 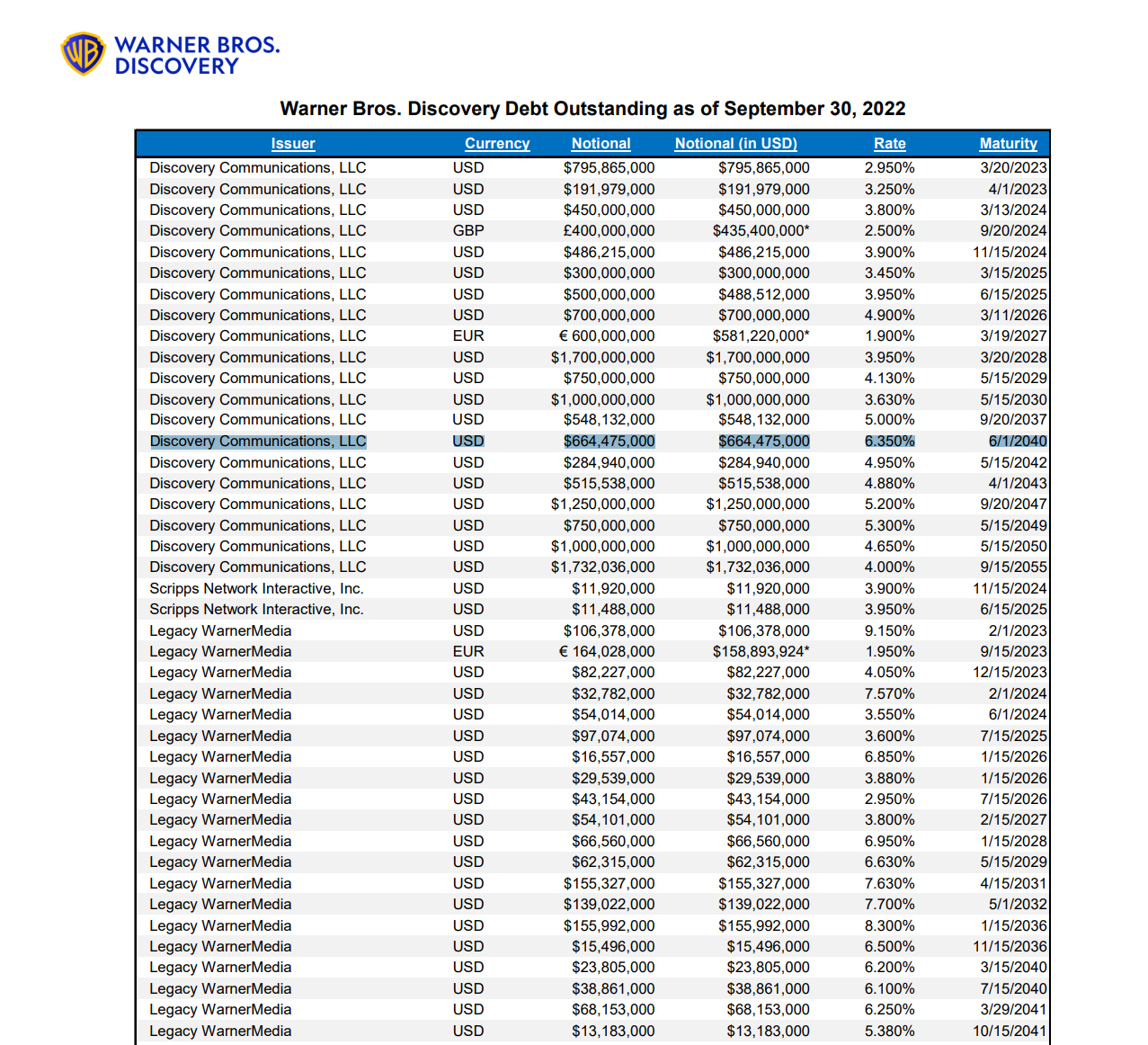 Extrapolating this thought towards their entire debt on the balance sheet: if the debt would be carried at market value instead of notional (book value) value, their debt would be significantly lower.

Diving further into the financial statements of Warner Bros. Discovery we notice that they have paid back their debt for $7.2 billion using their cash flows and cash position thereby decreasing their total debt and net debt significantly in the past quarters, as shown in the tables below. 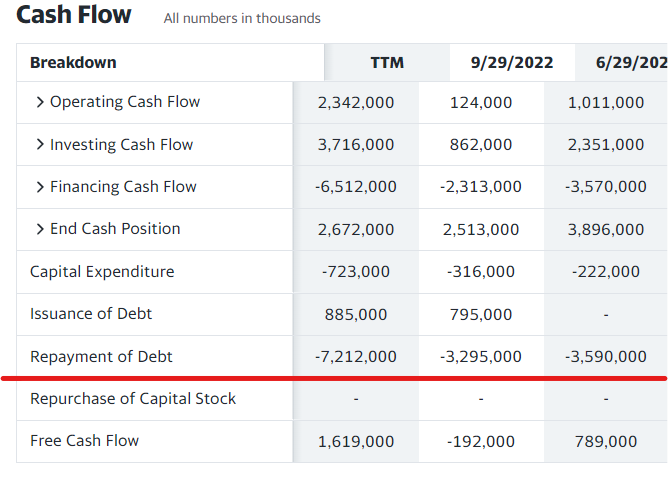 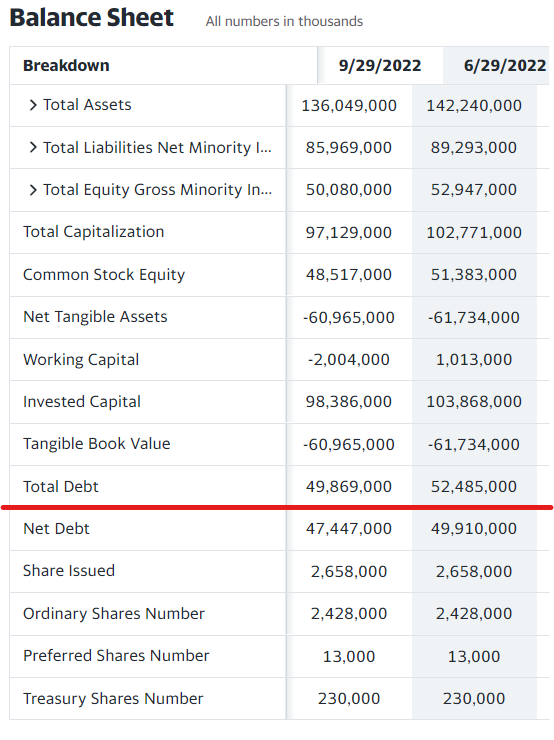 Yet, according to the Wallstreet Journal: ”The net debt of $47.5 billion is a dark cloud”.

The Media Leader: ”However, in the new venture’s first financial report since the merger, what stood out was the size of the company’s debt, much of which originates from WarnerMedia.”

”Looking at Warner Bros. Discovery’s financial situation through the lens of its debt can help us understand how its leadership is looking for places to cut costs, especially in an era of rising interest rates.”

Despite a significant debt, the company’s free cash flow offers some potential light at the end of the tunnel. As of July, Warner Bros. Discovery’s free cash flow was considerably higher than its biggest competitors, Netflix and Disney according to The Motley Fool.

The company has reported losses mainly due to high depreciation (paper accounting expenses) and merger and restructuring expenses (which will subside). In some positive news, however, the company will be added to the NASDAQ-100 which means all Nasdaq ETF’s will need to buy WBD from december 19th onwards.

In this article we learned that prices of existing bonds go down when interest rates go up. We furthermore learned that that may lead to an overstatement of debt on a companies balance sheet. As long as these companies have the free cash flow to pay off their debt, instead of issuing new debt for higher interest rates (remember that rates have increased), this may lead to unique opportunities in the stock market. These companies look like roadkill due to the debt and on the surface, Warner Bros. Discovery for example looks like a dying company with too much debt and past quarter losses of several billion dollars. But if you are willing to look under the hood, you notice a company that is able to pay of billions of dollars in debt in several quarters from their cash flows thereby enhancing their equity value. There are several more companies with high debt and high free cash flow that are able to buy back their debt at bargain prices in the current market and this may lead to some confusion regarding their true value. The unique opportunities presented to investors today are unique because we have never seen such fast interest rate hikes by the Federal Reserve.

As a last warning sign: On the other hand, buying back debt can also be a sign of financial weakness if the company is using its cash reserves to pay off debt rather than investing in growth or improving its operations. In this case, the buyback may provide only temporary relief, and the company may still face financial difficulties in the future. Ultimately, the decision to buy back debt should be based on a careful analysis of the company’s financial situation and its long-term strategic goals.