My Updated Due Dilligence on GET Protocol

My Updated Due Dilligence on GET Protocol

GET Protocol is a blockchain-based smart ticketing solution, that currently allows several ticketing companies across Europe and Asia to issue innovative & transparent NFT tickets. In my first blog on GET protocol (My Due Dilligence on GET Protocol) I extensively discussed what a NFT ticket is and how GET protocol uses NFT’s in their ticketing solution. I recommend the reader to first read that blog entirely to make sure the reader is familiar with the terms and specifics regarding GET protocol and NFT tickets. In this blog, I will mainly focus on the developments within GET protocol since the last blog. Firstly, we will update the tokeonomics with new information. Second we will update the fundamental analysis and show that many positive developments have taken place in the past 8 months. Lastly, we will again make the investment case for GET and show why our initial investment analysis still stands.

We have updated the supply that is burned by taking the Null adress which therefore leads to a new total supply of 22.926.928 GET (similar as on Coingecko). We noticed a significant drawdown in the supply held in the User Growth Fund of -1.285.000 GET compared to February 2022 leading to an increased circulating supply. The marketcap has decreased significantly due to the decrease in price. The summary of the tokeonomics is shown below in Table 1.

So in addition to the DAO Treasury and the User Growth Fund (UGF) we now have a Protocol Owned Liquidity (POL) that currently contains 459.758 GET. Basically the POL provides enough liquidity for ticket issuers and lets the protocol earn revenues on the fees from decentralised exchanges by providing liquidity to these trading pools. Eventually this is a positive effect for the supply of GET, as the POL essentially is eating up a part of the GET bought or sold on Sushiswap thereby increasing the number of GET in the POL and lowering the circulating supply. You can read more on the GET Protocol Owned Liquidity in this link. Further statistics and information is displayed in this Dune Analytics link. We furthermore notice that several important things have happened compared to our initial due dilligence in February 2022:

In order to keep this update concise, I will not go through all the fundamentals of GET protocol in detail. I refer to my first blog on GET for a basic understanding of the fundamental values and developments of the protocol. In our first blogpost, we discussed the GET 2022 Roadmap Blog in which the team pointed out their goals and strategy for 2022. Since we acknowledged that we rely for a large part on the GET protocol team for the succes of our investment, we will therefore check if the team ”walks their talk” according to their own projections and aspirations on the biggest goals and developments. Ofcourse, it is not possible to achieve all your goals in one year as the day-to-day businesses also require attention and every business has fluctuations and changes, but we mainly want to check if the team acts in line with their talk and visions.

We notice that the team has achieved progress for all their major points and goals in their 2022 Roadmap. The team has taken the necessary steps to improve the value of their NFTs and the GET protocol by improving the structure of the DAO with staking, implementing the POL, experimenting with event financing, releasing the V2 of the protocol among various other endeavours. We can therefore conclude with confidence that the team walks their talk. In addition, we have noticed that the team has never done something drastically different than what they communiciated to the community and their investors. We are therefore looking forward to their 2023 roadmap blog in the coming months and think a yearly roadmap blog is a great way to 1) keep the team focused on their projections and goals 2) provide clarity to their investors and community towards the goal of the team in the coming year.

According to Coinmarketcap, the protocol has a market cap of $30 million, placing GET protocol at #660 based on marketcap, which is a signal showing GET protocol is undervalued. ✅As discussed above, the total supply of GET is fixed at 22.926.928 tokens, meaning no more tokens can be minted and added to the supply. For comparison, bitcoin has a total supply of 21.000.000.✅Since the number of tickets sold determines the number of GET used as fuel in the GET protocol, ecosystem (i.e. more tickets sold means more GET is used in the protocol), the growing number of tickets sold is an increase in demand for GET. ✅Note that the circulating supply, meaning the GET that is available for trade on the open market, is 16.594.257 GET

I argue that GET protocol, based on our initial due dilligence, has an projected growth rate of 15-25% YOY ✅ as GET protocol provides their users with new value, is an innovative scale-up and provides above market products that these existing ticket companies do not.

I argue that GET protocol should at least be at top-100 project, perhaps even a top-75 project based on their fundamentals. I therefore argue that the valuation of GET should be between $400 million and $600 million, with a price per token between $17.50 and $25. ✅If the total value of cryptocurrency-market increases, so would the valuation of any top-100 project, therefore further increasing our estimated price per GET based on the market valuation alone. We show this comparison in Table 2 below.

In our initial due dilligence we compared GET protocol to traditional ticketing companies. In the best case possible, GET protocol could eventually grow towards the valuation of one of the companies mentioned in the blog. As an investor, however, you do not want to rely on small possibilities, best case valuations only and moonshots. Conservatism is necessary when constructing investment analyses. I therefore do not argue that GET protocol should be valued at $26 billion but merely that there is enough room for potential growth in the future. Combined with the industry growth rate of 10-20% YOY, this goes to show the huge potential for GET protocol in disrupting the ticketing industry. As discussed in the initial blog, the total ticketing market is estimated to grow to $60 billion by 2026. Since GET protocol can provide a protocol for the entire market, if GET protocol is able to handle even 1% of all tickets issued, this would lead to a valuation of $600 million (and price per token of $25). Therefore we do not feel the need to adjust this valuation method since the potential remains. 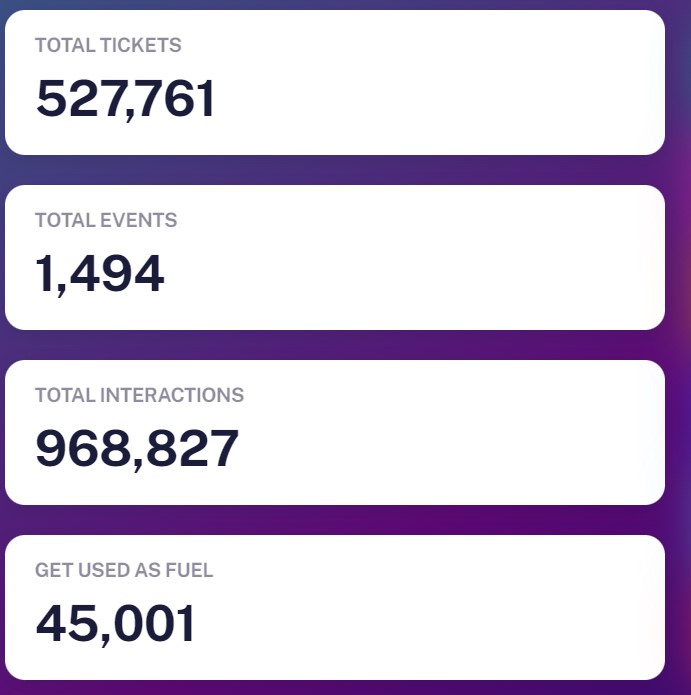 The growth in ticket sales has increased significantly for the past 8 months.

This further means that GET protocol, has sold more tickets in the past 8 months than in the rest of their entiry history combined. That is some exponential growth. In the last 3 months, the protocol has managed to sell 527.761 tickets which is around 175k tickets per month, or extrapolated over 2.1 million in 2022. In fact, since we estimated in our first blog that GET protocol would sell 1.575.000 tickets in the entire year of 2022, we need to adjust our ticket growth estimations to the upside.

At first sight, the 40% yearly growth seems the most reasonable scenario at the moment. No matter which specific growth rate you use for your own projections, the number of tickets sold is likely to grow exponentially over the course of the coming years. 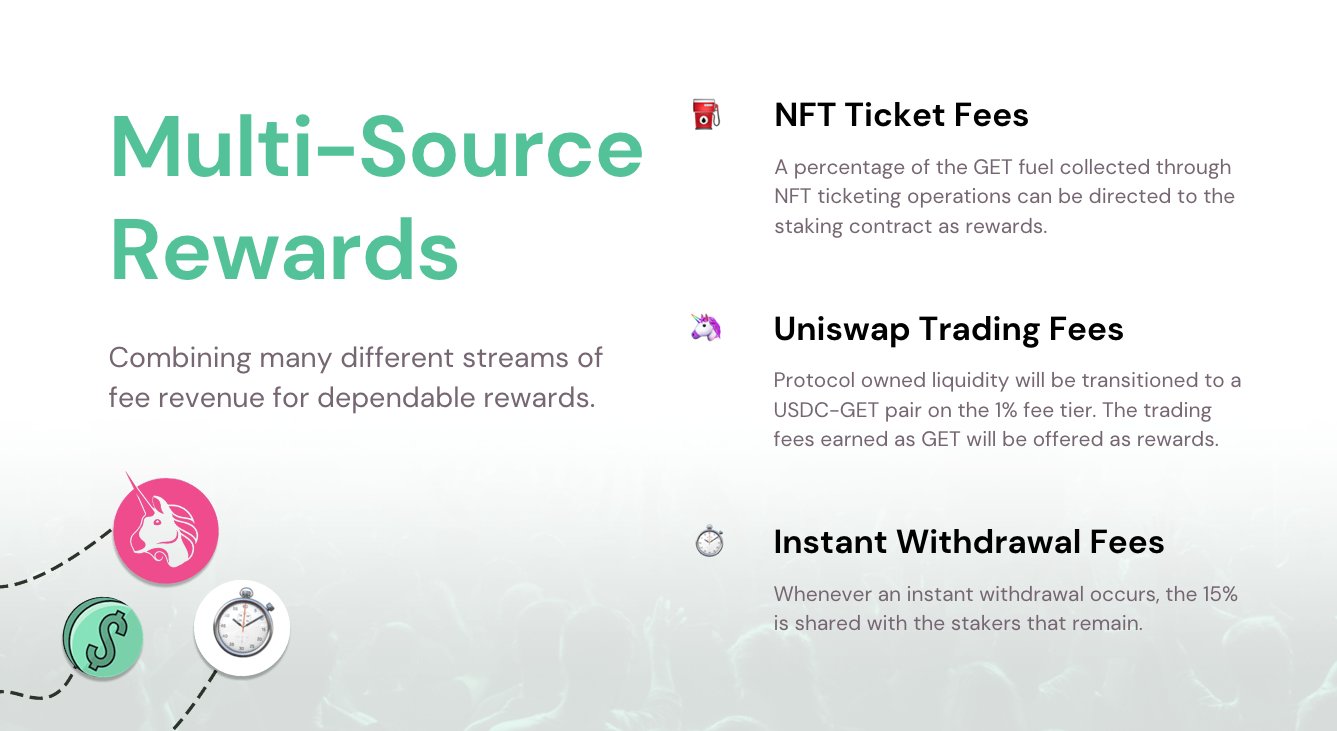 So we know that the protocol handles 240k GET per year at current ticket sales. If ticket sales increase without the increase in price of GET, more and more GET will be used. Eventually this will lead to a demand shock as more GET will be used which means increased demand from the ticket issuers. Since staking will be coming before the end of the year, we will use the rest of our blog to speculate on the dividend yield.

We assume the 240k GET to be the baseline scenario. We furthermore assume that the increase in price is offset by the growth in ticket sales and therefore the demand for GET. Stakers would need economic incentive to stake (and lock) their GET in the staking contract, so a low dividend yield might not attract enough investors to stake their GET. If more GET is locked and staked, this is a positive supply shock towards the circulating supply of GET. We therefore assume that the dividend yield will be anywhere between 0.5% – 2% with at least 0.25% in order to incentivize holders to stake and lock their GET. This means that if 5 million GET is staked and 10% of the GET used as fuel (10% x 240k) is send to staking, the dividend yield would be 0.48%. If you are already invested in GET protocol, this is a great way to receive a risk-free rate of return on your GET and be able to participate in the governance of the project.

Since our last blog on GET protocol, we notice that the catalysts for a supply/demand shock are now starting to be put into place. This can potentially lead to a growth in price of the token. The protocol will earn revenues by their POL and the GET fuel that is send back to the team. The outstanding supply will decrease due to locked staking, the increase in the POL and the top-ups by the integrators.

Compared to February 2022: The V2 protocol has lead to an increased usage of GET as fuel in the protocol (higher demand), staking will lower the circulating supply (lower supply), the POL leads to a lower circulating supply (lower supply) and the increase in the number of tickets sold leads to a higher demand. Simple economics suggest us that the value of protocol and therefore of the GET token will increase in price. With staking coming before the end of the year, it will be highly interesting to see how much of the GET will get locked in the staking contract and what the impact on the supply will be. We remain commited to our initial statement that GET is undervalued in the cryptomarket. Since the last price of $2.10 already looked like a steal to me, I am certainly happy to load up some more at $1.30 to enlarge my staking position in the coming months.

GET protocol is a blockchain-based smart ticketing solution, that currently allows several ticketing companies across Europe and Asia to issue innovative & transparent tickets. GET protocol is founded in 2017 and has sold over 2,800,000 tickets up to date. The main problems of the ticket industry that GET is trying to solve are scalping, the lack of transparency, traceability and proof of authenticity. For every ticket sold GET is used as fuel in the protocol, eventually having a deflationary effect on the circulating supply of GET. GET protocol has a small market cap and has enormous room for growth in the future. In addition, the ticket industry is furthermore projected to grow exponentially in the coming years. Not only does the number of tickets sold grow exponentially, the team is also implementing various developments that will increase the value of their NFT’s and therefore the GET token. According to our investment analysis, GET protocol is highly undervalued compared to other cryptocurrencies. Projections show that GET protocol has the potential to be valued at around $25 per token in the future.